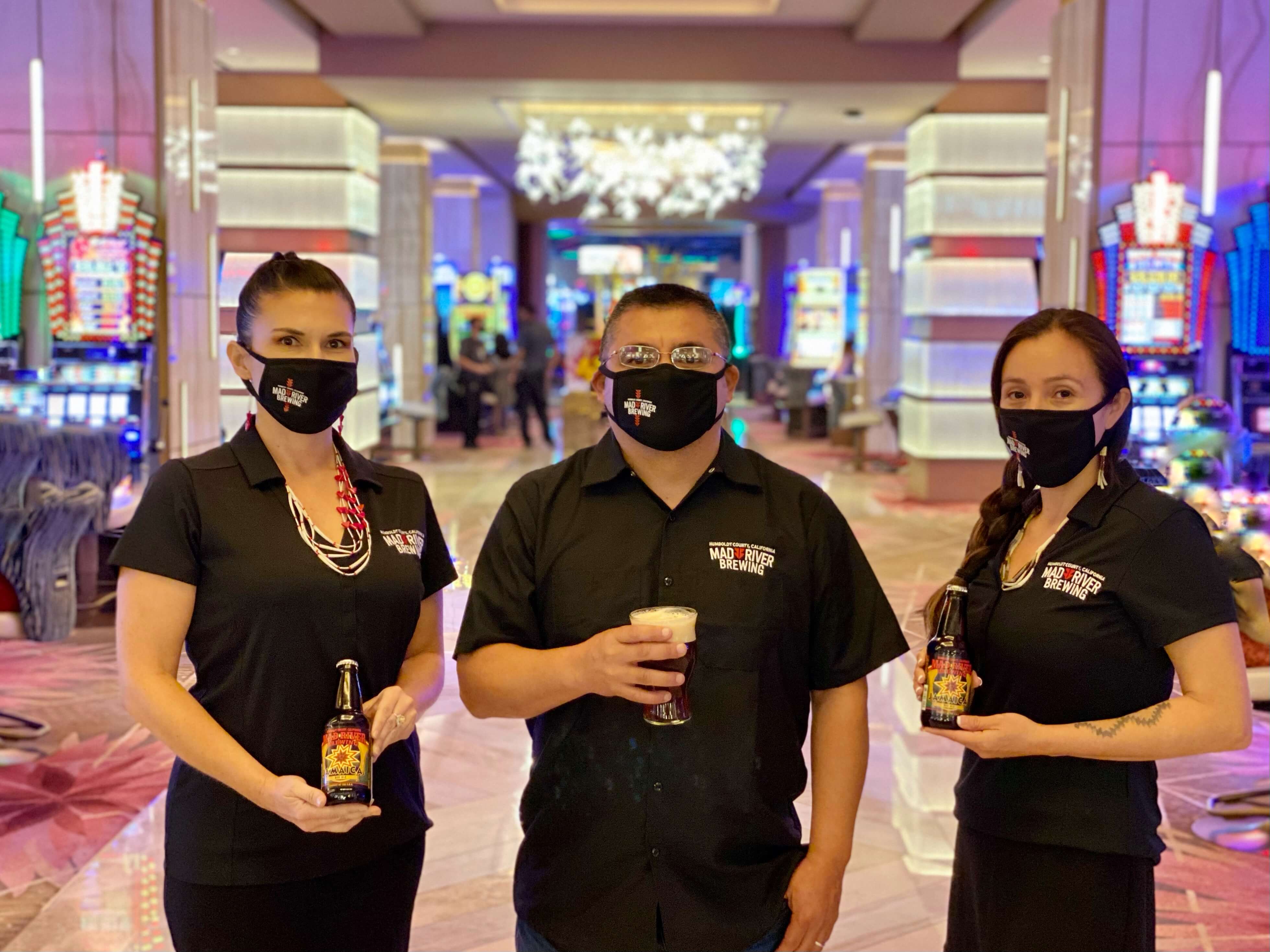 Highland, CA (November 24, 2020) – During the past a decade, the Yurok Tribe and the San Manuel Band of Mission Indians have enjoyed a genuinely unique, reciprocal government-to-government relationship, despite the immense geographical distance between the tribal nations.

The two tribes, located at the far northern and southern ends of California, have forged a partnership on a wide variety of undertakings, ranging from public health projects to cultural exchanges. When a major natural disaster hit the Yurok Reservation in 2020 San Manuel sent the Yurok Tribe funding to address the emergency. During the past two decades, Yurok leaders joined San Manuel Band of Mission Indians in advocating for California schools to teach factual, representative accounts of California Indian history and culture through the California Indian Cultural Awareness Conference hosted by Cal State San Bernardino.

The tribal governments also recently incorporated intertribal commerce into their longstanding, nation-to-nation relationship. As a result of a newly completed agreement, patrons of San Manuel Casino, Southern California’s most thrilling casino, are now served high-quality, sustainably produced ales from the Yurok Tribe’s Mad River Brewing Company — one of the first tribally owned breweries in the U.S.

“We are extremely grateful for the opportunity to do business with one of the most successful tribes in the nation,” said Joseph L. James, the Chairman of the Yurok Tribe. “Our unparalleled partnership is a prime example of how tribes can lift each other up in the 21st century. The Yurok Tribe and San Manuel Band of Mission Indians couldn’t have a closer relationship even though we are 1,000 miles apart.”

“Workable intertribal trade can be a powerful expression of our sovereignty and our right to determine our own destiny,” said San Manuel Band of Mission Indians Chairman Ken Ramirez “Tribe to tribe commerce is the future. The Yurok Tribe and San Manuel Band of Mission Indians are carving out possibilities and opportunities toward the restoration of economic resilience in our respective communities.”

The Yurok Tribe, California largest tribal nation, resides in one of the most economically disadvantaged and rural parts of the state. Due to a number of factors, including historical trauma, loss of land and detrimental federal policies, the unemployment rate on the Yurok Reservation is greater than 30 percent. The median family income is $28,300, which is less than half of the national average. Unlike city and county governments, the Tribe does not collect taxes from reservation residents. Instead, the tribal government depends on a combination of grants and business revenue to sustain its social, environmental and healthcare programs.

“That is why this business arrangement with San Manuel Band of Mission Indians is so important for the Tribe. The proceeds generated from this partnership will fund essential services for the Yurok people,” explained Chairman James. “In addition to bolstering the Tribe’s social safety net, participating in intertribal commerce is putting us back in a position to decide our own fate.”

“Intertribal commerce is also consistent with the traditional cultures of both of our tribes. Since time immemorial, we maintained sophisticated trade routes that extended well beyond our respective aboriginal territories. Now, we are creating a modernized version of this traditional economic system to meet the needs of our citizens,” said Chairman Ramirez. “Before colonization, San Manuel Band of Mission Indians and the Yurok Tribe maintained complex economic structures that allowed for environmentally responsible uses of our lands and natural resources.”

Prior to European contact, indigenous nations on the California coast constantly traded utilitarian and luxury items. Due in large part to these interconnected economies, every tribe in this region enjoyed an excellent standard of living until the so-called Gold Rush, when white settlers forcibly seized many tribal trade routes in an attempt to weaken indigenous resistance against state-sponsored genocide, which ripped apart tribal communities. Tribes in the Golden State are only just now beginning to recover from this tumultuous time period.

“Tribe to tribe trade served us well for millennia and today it is helping us rebuild our communities in a manner that is congruent with our cultural values,” concluded Chairman James.

The San Manuel Band of Serrano Mission Indians is a federally recognized American Indian tribe located near the city of Highland, Calif. The Serrano Indians are the indigenous people of the San Bernardino highlands, passes, valleys and mountains who share a common language and culture. The San Manuel reservation was established in 1891 and recognized as a sovereign nation with the right of self-government. As an indigenous community the origins and history of the San Manuel Band of Mission Indians stem from our relationship with the land and to all who share it. Since ancient times we have expressed ourselves through a culture of giving. Today, San Manuel is able to answer the call of Yawa' (Serrano word meaning “to act on one's beliefs”) through partnerships with charitable organizations. We have drawn upon our history, knowledge, expertise and cultural values to direct our philanthropic giving in our local region, as well as to Native American causes nationwide. For more information, visit http://www.sanmanuel-nsn.gov.

About the Yurok Tribe

The Yurok Tribe is the largest Tribe in California with more than 6,200 members. The Tribe’s ancestral territory comprises 7.5 percent of the California coastline, spanning from the Little River to the south and Damnation Creek to the north. The eastern boundary is the Klamath River’s confluence with the Trinity River. The Tribe’s major initiatives include: condor reintroduction, fisheries protection, Klamath River restoration and management, dam removal, natural resources preservation, sustainable economic development and land acquisition.