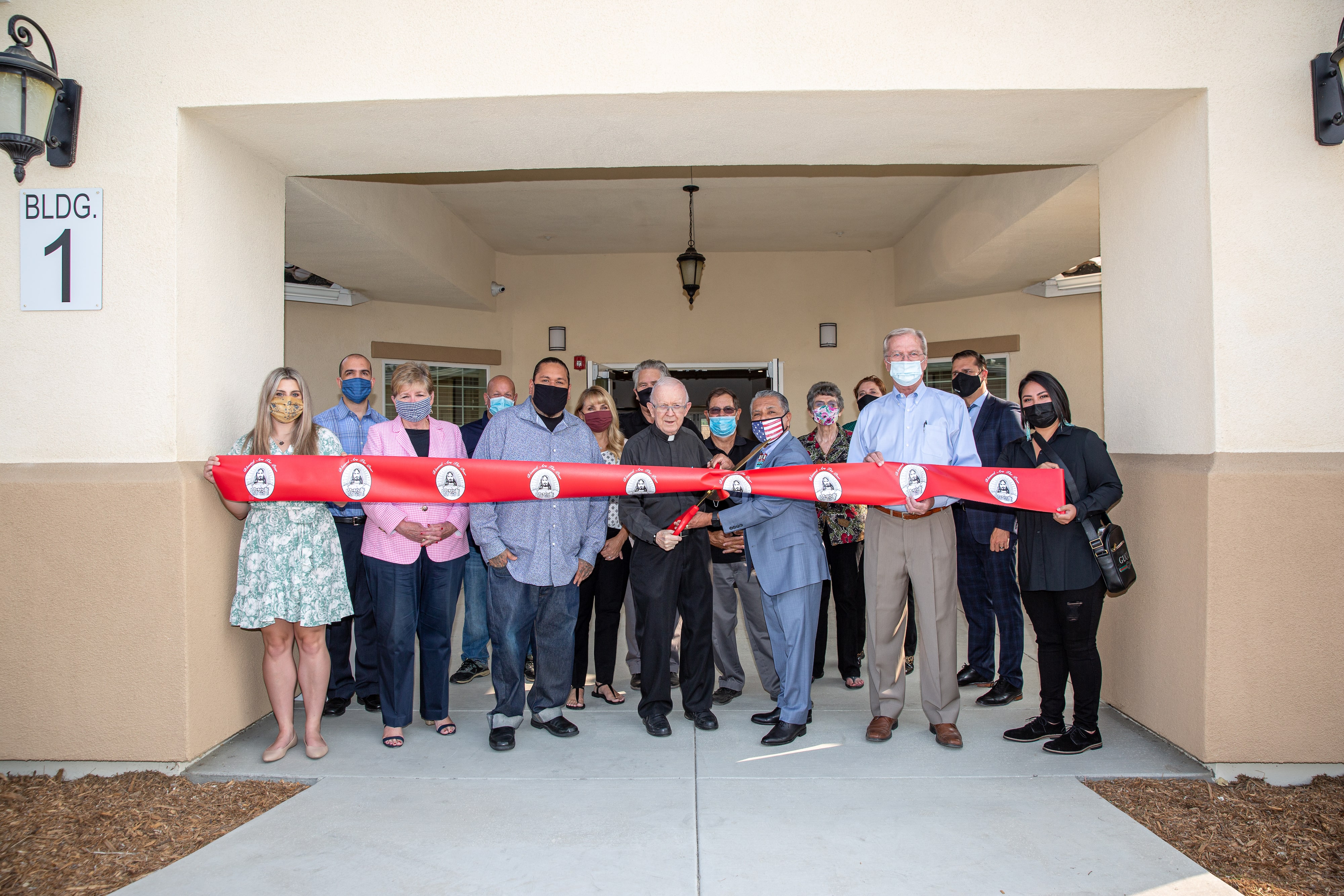 This four-phase comprehensive project will make a significant impact in the lives of homeless men by not only providing short-term housing, but providing vocational education, job training, comprehensive case management and other customized services to put them on the path to self-sufficiency. This first of its kind project is a collaboration between Mary’s Mercy Center, Crestwood Communities, Southern California Edison and San Manuel Band Mission Indians. The support of Southern California Edison allowed this development to be built zero net energy, which means it is an energy-efficient building that is designed to generate enough solar energy to offset its energy costs over the course of a year.

Mary's Mercy Center President Father Mike Barry and Vice President Mike Hein opened the celebration with a prayer an by offering a blessing for each of the buildings. "There is an inspiring quote from the Book of Proverbs which says, 'My people die for lack of vision.' This characterizes the origin and development of Mary's Village. It also characterizes the entire history of San Manuel who have bought a vision to Mary's Village and developed their vision within the unfolding of a 'home' for the poor, the less fortunate and homeless men." said Father Mike Barry. "Those who knew misfortune and homelessness have risen to help those who need it most. Their suffering and pain has brought blessings. If it is one thing, among many, that characterizes the San Manuel Band of Mission Indians, it is hope to set in a vision."

Several other key stake holders such as, Kitty Garver, CEO of Crestwood Communities, Terry Kent, VP of Operations for Crestwood Communities, the Mayor of San Bernardino, John Valdivia and Chairman of the San Manuel Band of Mission Indians, Ken Ramirez spoke about what their contributions will mean to San Bernardino and the hopes that it can be an inspiration to other cities facing issues with homelessness.

“We are proud to collaborate with community groups who are dedicated to their mission, and demonstrate the capacity to deliver effective programs, who strive to give a hand-up” said San Manuel Band of Mission Indians Chairman, Ken Ramirez. “In our early years, the Catholic church helped provide food and basic needs to our Tribe and the decades long partnership with Mary’s Mercy brings that generosity full circle to benefit our entire community.”

The entire celebration and a virtual tour was broadcast via a live stream as in person attendance was limited to allow for social distancing.

About the San Manuel Band of Mission Indians

The San Manuel Band of Serrano Mission Indians is a federally recognized American Indian tribe located near the city of Highland, Calif. The Serrano Indians are the indigenous people of the San Bernardino highlands, passes, valleys and mountains who share a common language and culture. The San Manuel reservation was established in 1891 and recognized as a sovereign nation with the right of self-government. As an indigenous community the origins and history of the San Manuel Band of Mission Indians stem from our relationship with the land and to all who share it. Since ancient times we have expressed ourselves through a culture of giving. Today, San Manuel is able to answer the call of Yawa' (Serrano word meaning “to act on one's beliefs”) through partnerships with charitable organizations. We have drawn upon our history, knowledge, expertise and cultural values to direct our philanthropic giving in our local region, as well as to Native American causes nationwide. For more information, visit http://www.sanmanuel-nsn.gov.