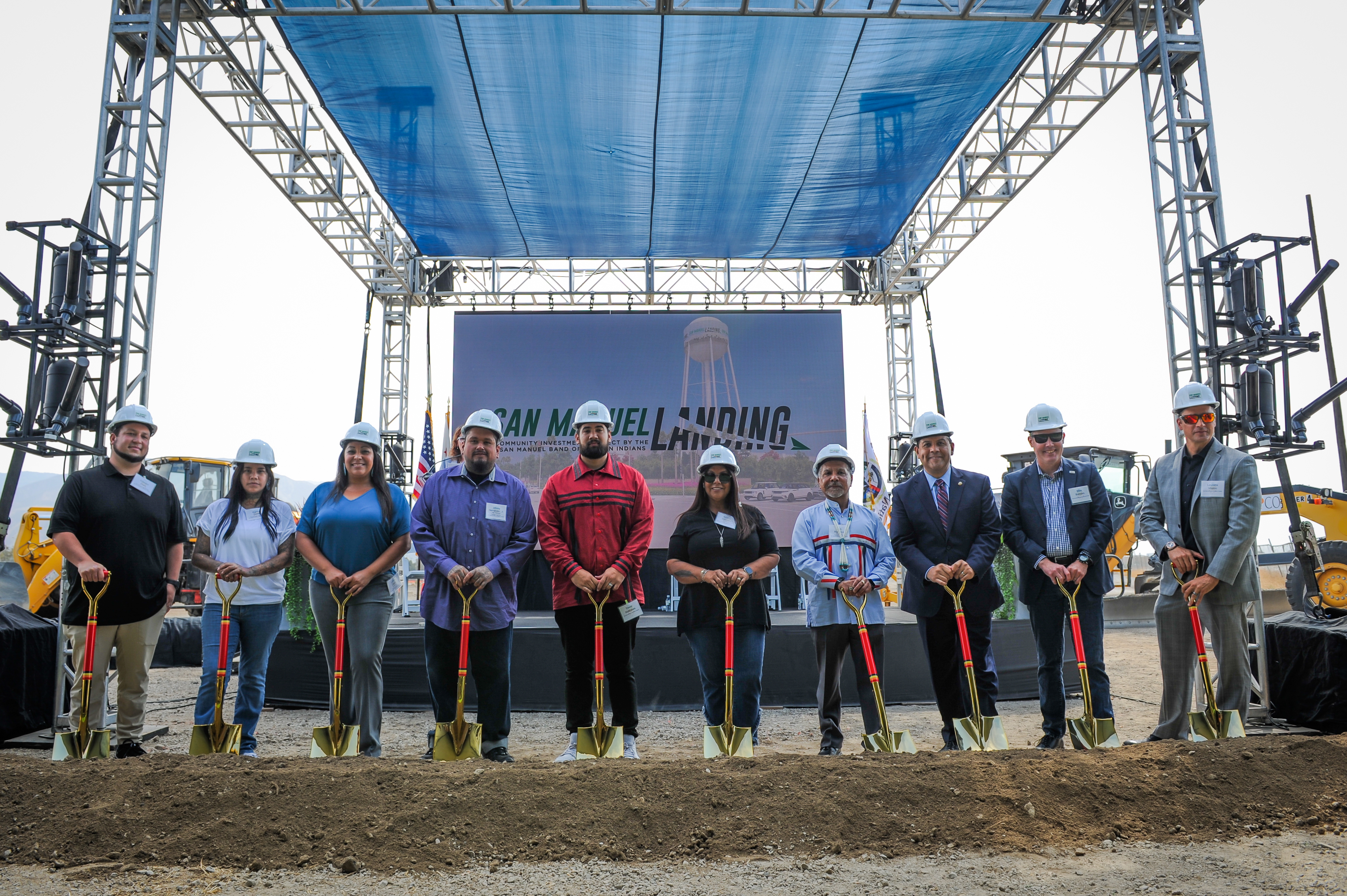 San Bernardino, California - The San Manuel Band of Mission Indians was joined by civic leaders and community partners on Friday to break ground on San Manuel Landing – a state-of-the art commercial center, supply and logistics facility that will further the Tribe’s commitment to long-term investment in the economic development of the region. The ceremony was held at the former Norton Air Force Base, where the new facility will be built.

San Manuel Landing is one of the Tribe’s latest investments in urban renewal and community revitalization. In addition to creating construction jobs and permanent jobs, the development will add an estimated $6M in direct financial impact to the region through the payment of impact fees and permits and approximately $1M per year in property taxes. Designed to meet both CALGreen Certifications and Leadership in Energy Environmental Design (LEED) specifications, the 1.1M square foot complex is thoughtfully designed, incorporating a greenway park heralded by the iconic Norton Air Force Base water tower at its entrance with extensive landscaping throughout.  The center will use innovative “green” technology, including solar energy, accommodations for electric truck and vehicle charging, and an onsite truck staging area. An art mural on a prominent wall of the Landing will illustrate the inter-connected history shared by the Tribe and the former Norton site.

San Manuel Bird Singers opened the ceremony with ancestral songs native to the region. San Manuel Chairman Ken Ramirez spoke to guests about the history of the land where San Manuel Landing is being constructed and how it is part of a rich tradition of trade forged by the Serrano people. He also noted the long-standing connection of San Manuel tribal community members and the now closed Norton Air Force Base. The Chairman emphasized the desire of the Tribe to continue driving economic development for the Inland Empire with a focus on collaboration with governmental and community partners.

“Today we are walking in the footprints of our ancestors. The interstate system is built along the same trails that our ancestors forged during their travels and we are continuing their journey by establishing San Manuel Landing,” said San Manuel Chairman Ken Ramirez. 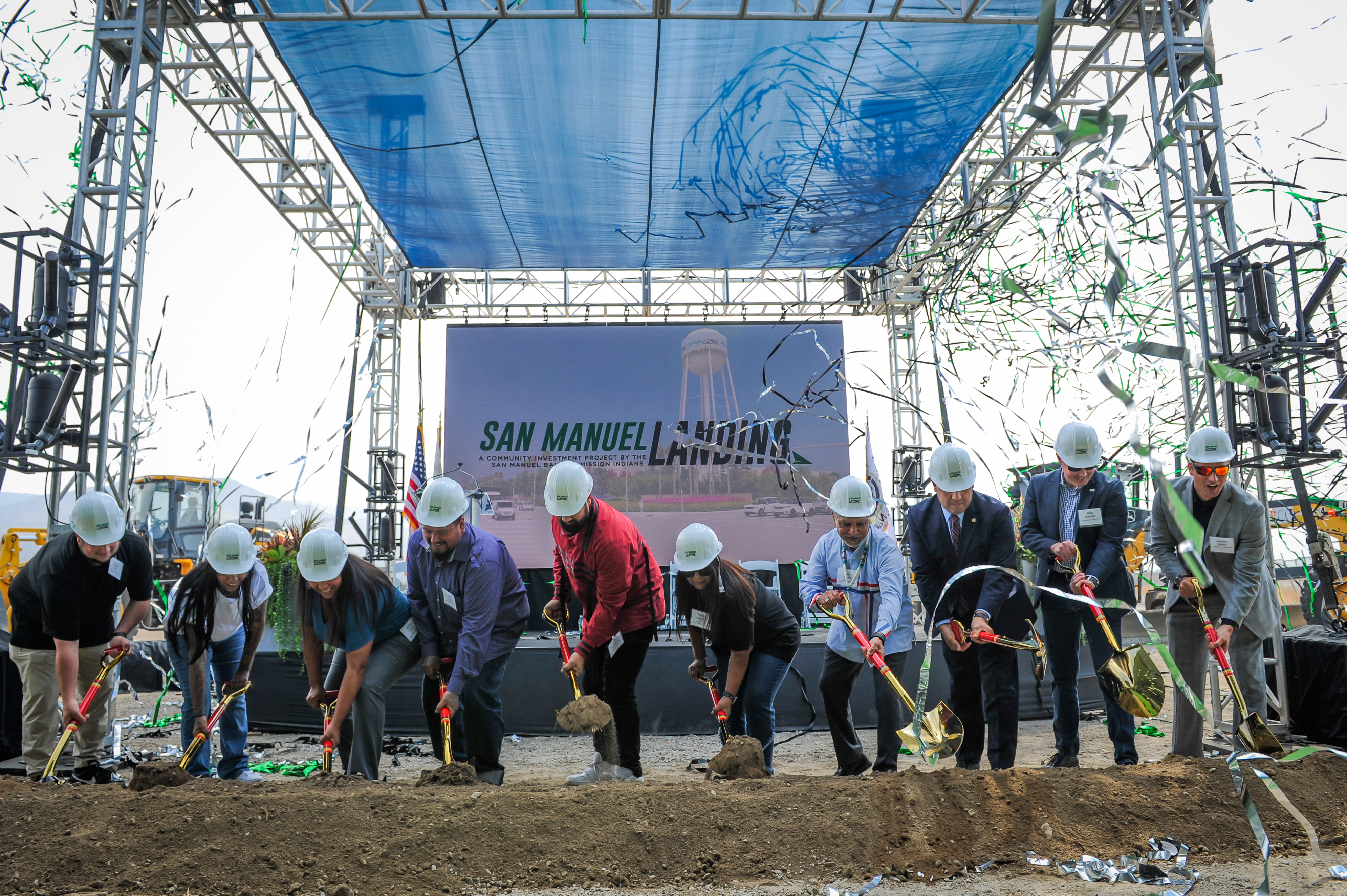 About the San Manuel Band of Mission Indians:

The San Manuel Band of Mission Indians is a federally recognized American Indian tribe located near the City of Highland, California. The Serrano Indians are the indigenous people of the San Bernardino highlands, passes, valleys and mountains who share a common language and culture. The San Manuel Reservation was established in 1891 when the Tribe was recognized as a sovereign nation with the right of self-government. As an indigenous community, the origins and history of the San Manuel Band of Mission Indians stem from our relationship with the land and to all who share it. Since ancient times we have expressed ourselves through a culture of giving. Today, San Manuel is able to answer the call of Yawa' (Serrano word meaning “to act on one's beliefs”) through partnerships with charitable organizations. San Manuel has drawn upon its history, knowledge, expertise and cultural values to direct its philanthropic giving to the local region, as well as to Native American causes nationwide. For more information, visit http://www.sanmanuel-nsn.gov